Eat This Not That Overview

What's new in the 2012 edition is a section called "What's Really in Your Food," which examines the ingredients and identifies those to avoid. There is also a new chapter of recipes. 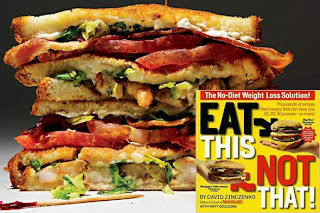 Beautiful, glossy photos steer you through the very simple diet concept: If you eat the recommend foods on the left side of the page instead of the ones on the right side, you should lose weight.

It sounds easy enough. But it’s unlikely if you are eating ice cream, pizza, and burgers -- all featured on the "eat this" side of the book. Losing weight could be the outcome, but only if you limit total calories and add regular physical activity.
Besides choosing the "eat this" foods, the authors say losing weight is not about dieting but instead about eating breakfast, sitting down to eat, planning meals, eating protein (not fat-free foods), getting exercise, and watching less television. These lifestyle tips are the cornerstone of most healthy weight loss plans.
Calories continue to be the most important factor used in selecting the best and worst foods, chef and co-author Matt Goulding says. He and co-author David Zinczenko, editor-in-chief of Men's Health, also considered other criteria.
"We take into consideration all the nutrients, and in some cases we would choose a full-fat peanut butter over a reduced-fat alternative because we think the 10 calories of savings doesn’t justify the extra five ingredients," Goulding says.

The book highlights nutrition information -- including calories, fat, saturated fat, sodium, and sugar content -- of popular foods. Those numbers could jolt you into making smarter choices in the grocery store and when eating out.
For instance, the book mentions the Ruby Tuesday avocado turkey burger, which sounds healthy but has 886 calories and 54 grams of fat; Olive Garden's chicken parm (short for parmesan) with 1,090 calories and 49 grams of fat; and PF Chang’s New York style cheesecake with 920 calories and 58 grams of fat.
"The shocking numbers on restaurant foods will help people steer clear of the calorie bombs and hopefully influence chefs to develop healthier menu choices," says Melinda Johnson, RD, an American Dietetic Association spokeswoman.
As a result of the colossal calorie and nutrient exposure, food manufacturers and restaurateurs are taking note. "We have seen changes in the food industry and have been recruited by major restaurants to help them improve menu offerings," Goulding says.