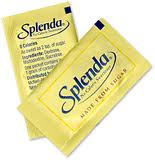 Some people are only used to sweetening their foods and drinks with real sugar. Yet with obesity and diabetes rates at high levels in the United States, many people look for sweeteners that are calorie-free. There are numerous types of artificial sweeteners, some of which have been proven to be unsafe. Splenda and stevia are the newest calorie-free sweeteners on the market.

Splenda and stevia are entirely different in composition. Splenda, which is actually the brand name for the artificial sweetener sucralose, is made from sugar but chemically altered so that it is indigestible by the human body. Naturalist physician Dr. Andrew Weil states that stevia is a natural sweetener, which comes from an herb in the family of chrysanthemum plants. Splenda is available in powder or granule form, and stevia comes as an herb, in liquid form or in powder form.

Both Splenda and stevia can be used to sweeten foods. You can sprinkle them in beverages, fruits or other foods you want to make a little sweeter. Splenda can be used as a substitute for sugar in recipes such as cakes and cookies. Read the instructions on the packaging for how to use it.

Because stevia is a plant, the leaves can be dried, crushed and used as you would other herbs and spices. The liquid, flavored extracts can be used in beverages such as coffee, tea and hot chocolate. You also can use them in foods such as oatmeal and plain yogurt to add different flavors and sweetness.

Because neither Splenda nor stevia contribute calories, they can be beneficial for people trying to lose weight. Using Splenda or stevia to sweeten drinks such as iced tea or foods like plain yogurt can save a lot of calories when used instead of sugar. Additionally, Weil states that stevia is a safe sweetener for diabetics because it does not spike blood glucose levels like sugar does. Diabetes Self Management states that Splenda also has no impact on blood sugar levels because it is indigestible.

According to Diabetes Self Management, Splenda, under the generic name sucralose, is one of the five artificial sweeteners that have been approved for use in America by the Food and Drug Administration. For this reason, Splenda is available at most grocery stores nationwide. Many restaurants and cafes also offer Splenda for use along with sugar. In 2008, the Food and Drug Administration added stevia to its list of GRAS (generally regarded as safe) sweeteners. It is now being used in some beverages and foods in the United States, but it is not nearly as readily available as Splenda.
Posted by Cindy Lane Ross at 1:32 PM