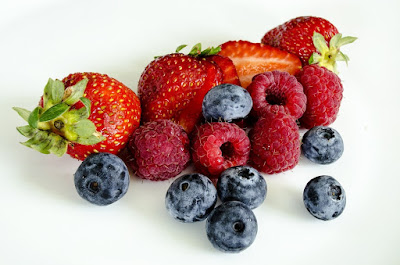 Berries are Superfoods that can improve your overall health!
Berries are a nutri- rich food that help with the dreaded term, aging!
Listed below are the benefits to the tasty fruits, enjoy, and improve your health at the same time!
Blackberries
Blackberries are special, beyond their basic berry goodness. Notable for their high levels of dietary fiber, vitamin C, vitamin K, folic acid and manganese, they also rank well for antioxidant strength, with notable levels of polyphenolic compounds, such as elegiac acid, tannins,
ellagitannins, quercetin, gallic acid, anthocyanins and cyanidins. By many accounts, blackberries are considered one of the strongest antioxidant foods consumed in the U.S.
Blueberries
Second only to strawberries in terms of U.S. berry consumption, blueberries are not only popular, but constantly rank near the top in terms of their antioxidant capacities among all fruits, vegetables, spices and seasonings. Studies suggest that blueberries may reduce memory decline, may reduce heart attack risk, and may provide other anti-aging benefits. They are also an excellent source of vitamins C and K, manganese and a good source of dietary fiber. One of the real beauties of blueberries is that they are native to North America and are grown commercially in 38 states, meaning fewer food miles and habitat destruction than some of their superfood sisters. Unfortunately, domestic blueberries test positive for 42 different pesticide residues in EWG’s examination of pesticide loads so purchase organic ones when you can.
Raspberries
The U.S. is the third-largest raspberry producer in the world, which is a good thing given our fondness for them and the health benefits they deliver. Because of their aggregate fruit structure, raspberries are among the highest fiber-containing foods, with up to 20 percent fiber per total weight. They are also a great source of vitamin C, manganese, B vitamins 1-3, folic acid, magnesium, copper and iron. As for the antioxidants, raspberries contain the all-important anthocyanins, ellagic acid, quercetin, gallic acid, cyanidins, pelargonidins, catechins, kaempferol and salicylic acid. Yellow raspberries are also grown, but they have fewer antioxidants. A compound found in raspberries, raspberry ketone, is routinely touted as a weight loss supplement, though more research is needed to determine the veracity of the claims.
Strawberries
Although strawberries are grown in every state in the U.S., California manages to grow 75 percent of the nation’s crops – in fact, the Golden State produces more than 1 billion pounds of
strawberries a year, which is surely appreciated by the 94 percent of U.S. households that consume the sweet red berries. Although strawberries aren’t exotic and don’t require long traveling distances and dwindling rain forests to thrive, they are one of the stellar powerhouses of the berry group. One serving of strawberries offers 85 milligrams of vitamin C, or 150 percent of the Daily Value. They provide fiber, manganese, folate, potassium, and like the rest of the berry family, antioxidants. Strawberries land in second place for pesticide load on EWG’s 2013 Dirty Dozen list, so purchase organic ones if you can.
Posted by Cindy Lane Ross at 1:26 PM